Arcanum: Of Steamworks and Magick Obscura

Everything About Fiction You Never Wanted to Know.
(Redirected from Arcanum)
Jump to navigation Jump to search 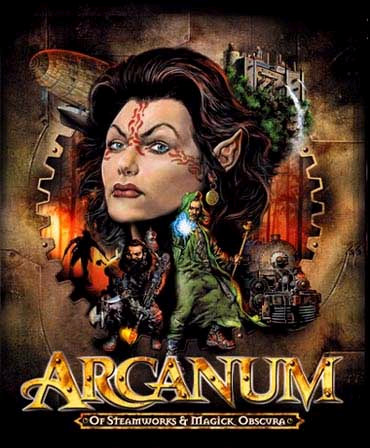 Exactly what it says in the subtitle...

Arcanum: Of Steamworks and Magick Obscura is an expansive and very open-ended Role-Playing Game where Tolkienian High Fantasy meets Vernian Steampunk, courtesy of the designers behind the first two Fallout games.

Much of Arcanum deals with Item Crafting and character building: almost everything the player finds can be customized, and The Dev Team Thinks of Everything. It contains a very detailed setting and a well-designed scenario, as well as vast amounts of political backstory in the game's libraries, newspapers and legends. The game retains a cult following similar to its cousin Fallout, and is additionally often very favorably compared to Baldurs Gate II and Planescape: Torment, although Arcanum's detail focuses more on its setting's history and mechanisms than on its playable characters.

The IFS Zephyr has just begun her maiden voyage, a marvelous, high-society venture through the clouds. Aboard, the cream of high society enjoys the flight, playing chess, sipping fine wine, etc. Sadly, nothing gold can last forever... and, out of the blue, the airship is attacked by a group of ogres on fighter planes. Within moments, the vessel goes down in flames.

There's only one survivor, the player character... and, as they crawl out of the wreckage, a dying gnome begs them to take his ring to "the boy". The player character soon meets a man named Virgil, who claims to have found the reincarnation of a long lost prophet... and that's where the story properly takes off.

The player can join up with a large amount of playable characters. Although their personalities are often not as well-defined as those of some non-playable characters in the game, many of them are (very nicely) voiced, and they all contribute to the plot and interact with each other. Many of them are hidden, and many of them require very specific alignment, charisma stats and dialogue from the player before they even suggest joining the party. Similarly, the player often needs to meet very specific aptitude requirements before certain quests are even mentioned, meaning that no two playthroughs are the same and that each new player character will have a unique experience.

Arcanum has a level cap of 50, which encourages players to specialize in very specific types of magic or technology (however, a no-CD-patch combined with a level cap remover patch can quickly fix that). Uniquely, knowledge of technology in Arcanum disables magical aptitude, and vice versa, so that the player will always have to choose between the two (or find a very, very careful balance) and (eventually) be shunned by the other branch.

Remarkably, the game is still being tested and patched by a squadron of devoted fans today. A new release by Good Old Games is now available, with the notorious bugs fixed and the game adapted to modern systems.

A sequel—titled Journey to the Centre of Arcanum and using Half Life's Source engine -- was in its initial planning stages, but Sierra and Valve had disagreements, and Troika's dissolution sealed the game's fate.

Tropes used in Arcanum: Of Steamworks and Magick Obscura include:
Retrieved from "https://allthetropes.org/w/index.php?title=Arcanum:_Of_Steamworks_and_Magick_Obscura&oldid=1960085"
Categories:
Cookies help us deliver our services. By using our services, you agree to our use of cookies.