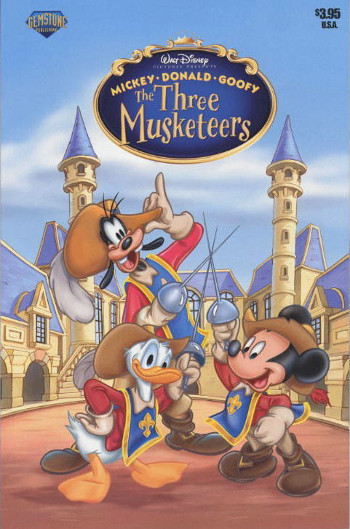 Mickey Mouse, Donald Duck, and Goofy. Sure, they can be musketeers this week.

You have a set of characters. They work well as an ensemble; so well, in fact, that they can be slotted into just about any scenario you care to imagine, within the constraints of genre (fitting an ensemble into a different genre is a completely different trope). So you can see them, identical but for different trappings (he was wielding a sword, now it's a blaster pistol...), in places as diverse as Feudal Japan, the Modern Era, Space Opera, etc., etc., etc.

What you have is a Universal Adaptor Cast: found anywhere that an ensemble is cast into an odd situation and yet fits in perfectly because their roles and characters are so well-defined. The best example is Commedia Dell'Arte, an Italian theater tradition that uses a group of characters whose characteristics and attributes are so well-known that the entire play is ad-libbed. Many Moe shows are practically Merchandise-Driven versions of the Universal Adaptor Cast. Separate Scene Storytelling is often done this way.

This is one of the essential justifications for a Transplanted Character Fic, including the High School AU. It can also justify a Fusion Fic, as well.

The Magnificent Seven Samurai is a specific subtrope of this.

Examples of Universal Adaptor Cast include:

Retrieved from "https://allthetropes.org/w/index.php?title=Universal_Adaptor_Cast&oldid=1669588"
Categories:
Cookies help us deliver our services. By using our services, you agree to our use of cookies.