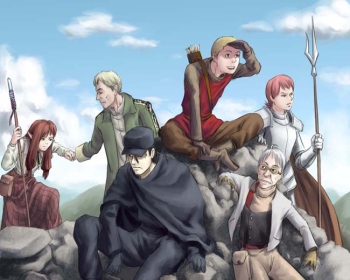 Hilbert is an idealistic village boy, the self-declared (and much ridiculed) protector of his hometown, and an aspiring hero. One day, he is approached by a mysterious robed woman named Zawu, who tells him that he is a descendant of the hero Alexander and destined to become a hero himself. So begins a legendary quest to defeat an ancient, evil power and bring peace to the world.

The basic premise of Last Scenario is to start out with the most cliched CRPG plot imaginable, and then twist it into something interesting. Before long, the cliches start to fall apart at an alarming rate, and what emerges is a long, compelling plot involving (among other things) international politics, betrayal, and the occasional bit of geology.

A freeware RPG by SCF, Last Scenario is a great example of how RPG Maker games can be done right. It can be downloaded at SCF's website. While you're at it, check out Exit Fate by the same guy.

Tropes used in Last Scenario include:

I proved my superiority. I have already won. I Regret Nothing.

Hans: Don't believe everything they tell you. There's a vast conspiracy manipulating all of this. That's right. Aliens from another planet are the real power behind this world.

I am happy beyond belief to finally have access to a Hex trading post. Although I'm not sure why they think we'd be interested in throwing knives.

That's right! You're a liar, Zawu!

Drakovic: If the Kingdom thinks they can take control of our country, I'll make their lives as miserable as possible.

"You are... not a very inconspicuous group."

Matilda: Are we interrupting something?

Gunther: What are you worried about, with no enemies in sight? You think they're just going to drop down from the sky?
(ladder drops and Matilda's team climbs down)

Matilda: You'd better come back alive. Otherwise I'll have no one to blame for this mess.

Drakovic: Ah, but a good strategist never reveals his most daring plans.
Matilda: ...Why?
Drakovic: That way... you don't look as bad if they fail.

Alexander: It is easy to rewrite history when the few who know the truth are unable to make themselves heard.