Normally I Would Be Dead Now 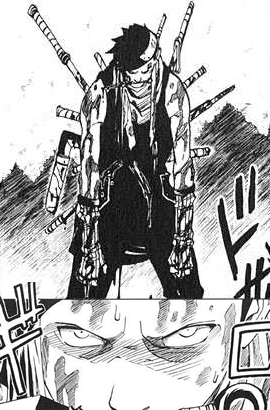 Despite the prominence of Only a Flesh Wound in media, there are some things that even writers would concede as pretty fatal. For example, if a character gets shot in the head or stabbed in the chest, they're pretty much done for, hopefully with enough time to give a Final Speech before their death.

Unless of course, if they're the Determinator or someone as tough. For them, that little hole where their heart was supposed to be is just another chance to show off how Badass they are. Even that is Only a Flesh Wound, and the guy that injured them, likely to be pissing in his pants right now, is about to receive a world of hurt. When this occurs in a climactic battle, you often see a Heroic Second Wind sequence.

Killing the character after their display of Heroic Willpower for extra dramatic effect, or to show that the the wounds were fatal after all, just not right away, is optional.

Note that Normally I Would Be Dead Now applies only to things that would have killed a normal character even by Hollywood rules. If it is "merely" something like severe bleeding from the shoulder or leg, that is Only a Flesh Wound. Surprisingly, this is actually a case of Truth in Television. There are many real life examples of people who had things rammed through their chests and heads and still lived due to the foreign material miraculously missing vital organs. This means there is a fine line between this and mere Aversion of Instant Death Bullet. However, it is far more common in fiction than in Real Life and all of them were left incapacitated or unable to move, so Don't Try This At Home.

May overlap with I Can Still Fight. See also, Made of Iron.

Examples of Normally I Would Be Dead Now include:

The Punisher's Nemesis Barracuda is the same. Shortly after meeting the Punisher, 'Cuda gets the fingers on his right hand chopped off, his eye stabbed out, and his teeth broken, not to mention later shot in the chest and hurled off a boat into shark-infested waters. Barracuda survives (he explains this by claiming he grabbed onto the back of the boat and got towed to shore), and comes after the Punisher again, and later tortured by having his nutsack clipped to a car battery, shot several times, blown up, his nose ripped off, before the Punisher finally kills him by chopping his hands off with an axe and shooting his head to bits with an AK-47. As Punisher had noted, "Barracuda was dead when you shot him to bits and shot the bits and burned them. Anything less just left that nagging doubt."

The Punisher's durability is justified by him making a deal with Death at the end of Punisher: Born, at the cost of his family.

Played with in that for a little while he really does believe that he died then and there. While in the hospital he hallucinates his dead father appearing to him, telling him that he's dead, and offering to take Victor with him to the afterlife. His love's dead grandfather also appears and says that because he died heroically defending her, he's there to offer to take Victor to their afterlife (a different one, as the two families were traditional enemies until the Clans forced an Enemy Mine between them). The two of them ask him to choose who to go with. As both options involve dying for good, he decides to take a third.

There is also Xander, who survived being smacked around with a hammer that injures dieties.

Yang also survives the destruction of the robotic Giant of Babil, which he himself caused by jamming himself into its world-sundering laser cannon so it misfired. He shows up at the end of the game without a scratch.

This also applies to Spidey himself in nearly every single episode, he can be beaten, scratched, smashed, burned, and hit with explosives from every villain he encounters, and he can still shake it off and fight normally. Most notably is one episode where he defeats the Sinister Six while sleepwalking. Granted, it was the symbiote doing all the work for him, but the fact that Peter still had all of his bones in the right place the next day is nothing short of a miracle.

Getting shot in the head and having the bullet not penetrate is surprisingly common, even with modern firearms. Given the strength and roundness of a skull, bullets can skip off or pull the "run under the scalp" thing described above. Of course more powerful rounds are less likely to fail to penetrate.

He also willed himself to live through a near-fatal case of malaria which ate fifty pounds off his body weight.

Retrieved from "https://allthetropes.org/w/index.php?title=Normally_I_Would_Be_Dead_Now&oldid=1547704"
Categories:
Cookies help us deliver our services. By using our services, you agree to our use of cookies.