Everything About Fiction You Never Wanted to Know.
(Redirected from Trauma Center)
Jump to navigation Jump to search 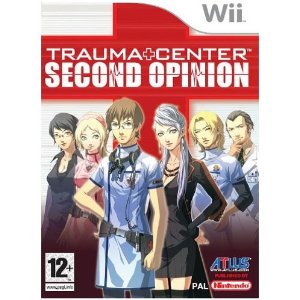 Simulation game for the Nintendo DS and Nintendo Wii consoles (released in Japan as Choushittou Caduceus, "Caduceus: The Great Surgical Operation"), where you get to save the world's health, one person at a time.

The year is 2018. You are Derek Stiles, a rookie doctor who has just begun his internship at Hope Hospital. Each stage/mission in the game requires you to correctly select and use a variety of surgical implements, such as the scalpel, the laser or the ultrasound, in order to cure each patient of his or her affliction. At the same time, you must avoid making too many mistakes, running out of time, or letting the patient's vitals drop below zero, any of which causes you to fail the operation and kill... your career.

Despite the unusual premise, at the beginning, things seem pretty mundane. You are guided by the motherly Nurse Mary and later her younger, spunkier, stricter replacement Nurse Angie in treating injuries and removing tumors, procedures made easier by the advanced medical technology at your disposal. One day, however, Derek is the only doctor available to perform an operation far more difficult than he can handle. As he frantically tries to concentrate, Derek feels time slowing down and miraculously manages to save the patient. He soon learns that he is an heir to an ability called "the Healing Touch", thought to originate from Asclepius, the ancient Greek god of medicine.

Armed with his surgical skills and his Healing Touch, Derek and his motley crew of colleagues must aid Caduceus, an organization of medical experts, against a deadly new disease called GUILT, parasites that kill in various intricate ways. GUILT is a man-made plague, unleashed into the world by Delphi, a shadowy cult that regards medicine as wrongfully extending life and interfering with God's intentions for when people should die.

This series has a character sheet. Put tropes related to the characters there.

Tropes used in Trauma Center (series) include:
Retrieved from "https://allthetropes.org/w/index.php?title=Trauma_Center_(series)&oldid=1804879"
Categories:
Cookies help us deliver our services. By using our services, you agree to our use of cookies.