Everything About Fiction You Never Wanted to Know.
(Redirected from Obake)
Jump to navigation Jump to search 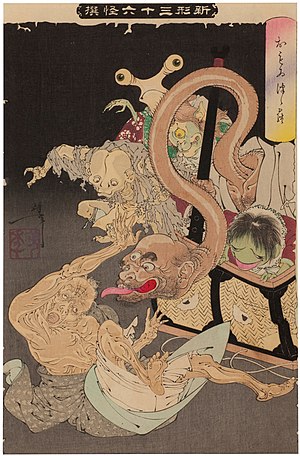 Youkai are a widely-varied collection of various supernatural creatures that pop up in Shinto religion. They have a lot in common with The Fair Folk from Western folklore. Some youkai are good, others are evil, and many are different. Some are mischievous, others avoid humans entirely. Shinto is an animist religion, and youkai are often associated with natural features such as forests and mountains. This word is often translated as "demon" in Western translations, but that does not adequately describe the creatures in question. The closest true Western equivalent is probably that of the ancient Roman genii or spirits.

Supernatural creatures drawn from Western sources often turn out to seem more like youkai in Japanese works.[1] For instance, vampires. In the West you've got Nosferatu—a grotesque, undead monster who burns in sunlight and murders to preserve his hideous unlife.[2] In Japan you've got exceptionally cute Fan Service protagonist Moka Akashiya, who is not undead, harbors no ill-will towards the sun, and drinks tiny amounts of blood that leave her "victim" light-headed at worst, but who has a Super-Powered Evil Side who can (and will if you look at her the wrong way) kick your ass thoroughly.

Henge, a subset of youkai, are magical animals with Shapeshifting powers and human intelligence. They often assume human form and get into all kinds of mischief. Kinds of henge include Kitsune, Tanuki, and Nekomata.

Obake is another Japanese word that can indicate some type of monster. Derived from the word for “to change,” it generally covers the subset of youkai that includes shapeshifting animals and Animate Inanimate Objects. Confusingly, however, the word obake can also be used to refer to ghosts, also known as yuurei. See Stringy-Haired Ghost Girl for more information.

The list presented below is by no means complete. Many types of Youkai are exceedingly rare to find in modern media and so are not included. On the other hand, Kitsune, Kappa and Tanuki have garnered enough examples to warrant their own pages.

A seemingly ordinary cat that develops magical nature through long life. It looks like an ordinary house cat, except for the tail, which splits into two at half-length. While much smarter than it used to be, a nekomata remains just as whimsical, which may be dangerous with its new found powers of illusion and Necromancy. It's said a cat will become a nekomata after turning 100 years old, where upon its tail splits, it starts using human speech, some how gains transformation powers, a greater intelligence, and other odd abilities. The name is often used and confused for catgirls. May be a Mega Neko.

inanimate objects that come to life after a hundred years. These can range from weapons to clothes to umbrellas (karakasa). Strangely, they avoid electrical energy in common folklore from the 1940's and it is said that no modern object could ever become a Tsukogami.

These are mountain spirits that share some things in common with trolls and ogres. The word is almost always translated into English as "demons" or "ogres." They are sometimes depicted as good or bad, but are usually morally neutral and interested in their own affairs. They prefer huge bludgeoning weapons and hide loincloths. Sometimes blamed for streaks of misfortune. Others work jobs in Fire and Brimstone Hell. Know the different kinds!

Literally meaning "snow woman", Yuki-onna appear as beautiful women in snowy, cold, or mountainous regions. Some incarnations sleep with lone travelers to steal valuable body warmth, others will simply make them get lost during their travels to freeze to death, yet others will kill travelers by tricking them into touching them or a baby they hold in their hands. More benevolent Yuki-onna will either lead the victims to safety or leave them alone; the more wicked ones will lead them astray to begin with and use them.

Mountain-dwelling crow spirits whose human forms originally had beaks, but have become phallically large noses. Long-nosed Tengu are red-skinned and humanoid, Karasu Tengu are anthropomorphic crows. May be cited as the origins of obscure martial arts training, particularly with ninjas. Other common features include long white hair, wooden sandals, and carrying large fans or parasols.

A relatively benign example, being a tapir-like monster that eats bad dreams.

Weasel-like creatures that attack in trios: the first one knocks down a traveler with a gust of wind, the second cuts the traveler with its sickle-like claws, and the third applies an ointment that stops the bleeding, leaving the victim with bloodless but inexplicably large and painful wounds.

A snake-like creature with a long, wide body. It is mostly harmless to most people, unless awoken from its sleep as its venom can fell a man instantly.

A monster that takes the form of an animate section of wall. It has the power to turn invisible, and likes to use this power to impede travelers.

These two creatures are Humanoid monsters, the Rokurokubi are human by day but have extremely elastic necks during the night, while nukekubi can detach their heads from their necks and float away in search of human flesh.

These spiders are monstrous in size (as big or bigger than a man) that can take human form to seduce travelers. Jorogumo uses a lure to attract travelers to feed her offspring, she often has the power to allure men with a song. Others act as a Shapeshifting Lover. Tsuchigumo can also use illusions to keep his webs hidden and make people ill in order to feed on them.

The "Thunder Beast" is a lightning in a weasel-like shape: it's usually represented with many tails and/or legs, poisonous claws, and bright yellow and black fur. Can also appears as a dog, a monkey, a tanuki, a fox, or even a ball of fire and lightning.

A burning wheel, frequently with a man's face serving as the hubcaps.

Also called "Kyuuki". Means Bull Fiend, and is a sort of counterpart to the Western Minotaur. In some stories it's a demonic looking ox with many tails and claws, in others he's a sort of giant spider, while in others is a sort of wisp fire.

Works that feature youkai include:
Retrieved from "https://allthetropes.org/w/index.php?title=Youkai&oldid=1694675"
Categories: