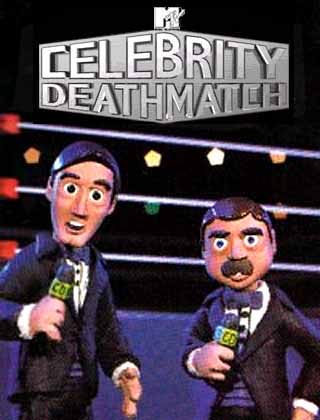 Celebrity Deathmatch is a 1998 Claymation animation series broadcast on MTV.

The concept behind this show is that celebrities would fight each other to the death in the ring, Claymation-style.

The show first premiered on MTV's 1997 animation show, Cartoon Sushi, with Marilyn Manson killing Charles Manson by ripping his skeleton out through his mouth. After it became a success, "Deathbowl 98" was released and shown during the Super Bowl XXXII halftime show. Eventually, it began running as a weekly series first on MTV from 1998 to 2002, then Uncancelled to MTV2 for two more seasons in 2006 and 2007.

There was also a fighting game released for the PlayStation, PlayStation 2, Xbox, and Windows PCs. It was also planned for a Game Cube release.

Tropes used in Celebrity Deathmatch include:

Nick: We've had a lot of close calls here on "Celebrity Deathmatch", but it's going to take a lot more than a flying celebrity to take me out!"

Nick Diamond:Hoist on his own Petard? Well I don't think the audience knows what "Petard" means. Cause I sure don't.

Eddie Vedder: (while kicking Stapp three times) Give me back my vooo-ooo-oice!
Scott Stapp: (retributing the "favor" to Vedder) It's my voice too-ooo-ooo!