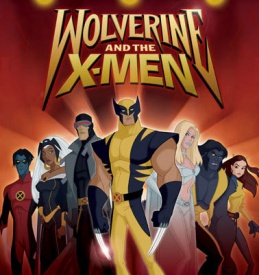 Sniktbub and some other guys.

Wolverine and the X-Men is the newest[when?] Animated Adaptation of the X-Men franchise, premiering in America sometime in 2009 and everywhere else in the world mid-2008.

The show begins with the destruction of the Xavier Institute, and Professor Xavier and Jean Grey missing, apparently dead. A distraught Cyclops disbands the team, and everyone heads in their own directions. After a run-in with some token anti-mutant villains, Wolverine decides the X-Men must be reassembled, and begins locating the missing members.

As the title may have told you, this show heavily focuses on Wolverine, even becoming the leader of the X-Men. Other characters do suffer from the switch in focus: Cyclops is pretty much a wreck after he loses Jean, Storm doesn't do much of anything after her introduction, and the Professor spends most of his time as a psychic vision. That said, there were more than enough A Day in the Limelight episodes to prevent things from being too repetitive, and the show explores the "Days Of Future Past" and "Genosha as Mutant Refuge" concepts in more depth than any other adaptation. Forge and Emma Frost are made part of the main cast for the first time.

Despite early reports of plans for Season 2, it was canceled after just one season, joining The Spectacular Spider-Man, which was canceled not too long before.

Tropes used in Wolverine and the X-Men include:
Retrieved from "https://allthetropes.org/w/index.php?title=Wolverine_and_the_X-Men&oldid=1947551"
Categories:
Cookies help us deliver our services. By using our services, you agree to our use of cookies.