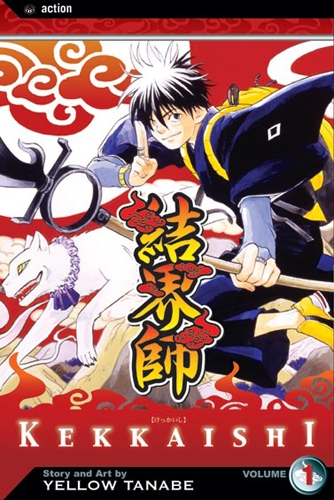 Kekkaishi is an anime and manga series centering around 14-year-old Yoshimori Sumimura and his 16-year-old neighbor/childhood friend/"partner" Tokine Yukimura. During the day, they are just ordinary (if slightly sleep-deprived) high school students, while at night they defend their homes and school grounds from monsters (Ayakashi) by conjuring multi-use barriers (Kekkai). They're eventually joined by the half-ayakashi Gen Shishio, and much later by Souji Hiura, a rather odd young man in his own right.

The story is not just as simple as that, however, as the protagonists find themselves and their protectorate involved in the devious plots of evil societies and megalomaniacs whose desires reach farther than mere destruction.

In America, the anime premiered in May 2010 on Adult Swim (with English dubbing) and on Hulu in early 2011 (in Japanese with English subtitles). The manga concluded in 2011. Yoshimori, Tokine and friends appear in the Massive Multiplayer Crossover game, Sunday VS Magazine Shuuketsu Choujou Daikessen.

Tropes used in Kekkaishi include:
Retrieved from "https://allthetropes.org/w/index.php?title=Kekkaishi&oldid=1750891"
Categories:
Cookies help us deliver our services. By using our services, you agree to our use of cookies.