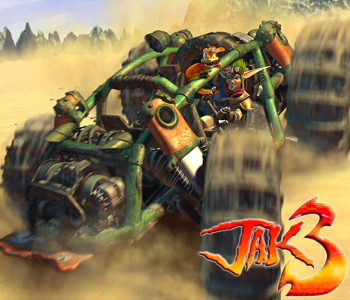 The third installment of the Jak and Daxter franchise.

The game starts as Jak is banished into the Wasteland from the now falling apart Haven City, which is caught up in a massive war between the remaining Krimzon Guard robots and the surviving Metal Heads. He copes by in the desert refuge known as Spargus, ruled by Damas, the former ruler of Haven City prior to being booted out by Baron Praxis. He quickly gains the respect of the Wastelanders, while gaining a new Light Jak form along the way, and returns to Haven to help with the war effort (but not long after discovers a much, much bigger threat to the world than anything before that was foreshadowed throughout the game); specifically, a race of Dark Eco corrupted Precursors, known as "Dark Makers", have found Jak's world and hope to terraform it into the very dark and twisted world Jak barely stopped it from becoming in the first game... along with the help of the former leader of the Krimzon Guard, Errol, who was nearly killed in an eco explosion in the previous game, but resurrected as an Ax Crazy, genocidal cyborg to aid the Dark Makers in their quest.

After yet another long journey, with even more crazy plot twists than before (but what do you expect when the game was directed by the same woman who wrote the Legacy of Kain series?), Jak saves the world yet again, wrapping the storyline of all three games and giving our heroes a satisfying conclusion. Like the previous games, the game was universally well received and was a hit in sales.

Tropes used in Jak 3 include:
Retrieved from "https://allthetropes.org/w/index.php?title=Jak_3&oldid=1783694"
Categories:
Cookies help us deliver our services. By using our services, you agree to our use of cookies.