The secret, magical branch of the Church of England. Formerly an anti-magic organization founded by the English Puritans, it is now a magical organization that defends Britain from magical threats. 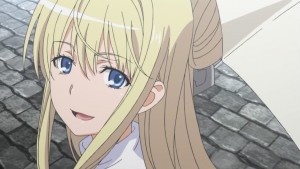 Lola Stuart is the Archbishop of Necessarius and also the English Anglican Church. Despite being the Archbishop, she looks like an eighteen-year-old girl with long blonde hair that's 2.5 times her height; other than that, few details about her are known. New Testament Volume 18 reveals that she's actually Lola Zaza Crowley, Aleister's second daughter. But for the entire series, her body has been possessed by the demon Coronzon, who'd been summoned by Aleister's mentor Mathers in order to ruin him.

Fortis931 -- I Prove Why My Name is the Strongest Here 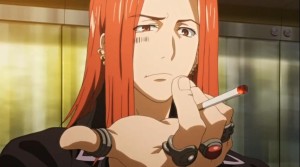 A sorcerer from Necessarius. His sorcery name is Fortis931. He’s an extremely heavy smoker, and claims a world without nicotine would be hell. He specializes in using runes to invoke his power over fire. He has a short temper but is actually very kind, as he cares about Index very much and used to travel around the world by her side when she copied the original grimoires into her mind. His failure to save her life without taking away her memories is his greatest regret.

Salvare000 -- Be the Salvation of Those Who Cannot Be Saved

An eighteen-year-old magician from Necessarius. Unlike her partner Stiyl, she uses magic to magically strengthen her body. Her sorcery name is Salvare000. She uses a two-meter-long nodachi called "Seven Heavens Seven Swords" as her weapon, and she has a special attack called Nanasen (Seven Flashes) that uses her sword and thin steel wires. She is also one of the world's fewer than twenty Saints.

Intimus115 -- I Offer Everything to My Lost Friend 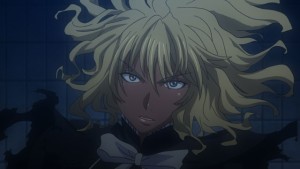 Her sorcery name is Intimus115, "Everything I offer to my lost friend". A member of Necessarius and a talented "Decoder", she has dark skin and wears a black Gothic Lolita dress. Her blonde hair is unkempt and according to Tsuchimikado, she has the silhouette of a lion. She is a master of Kabbalah Statue art and utilizes oil pastel or chalk to draw a spell to summon a golem Sherry refers to as "Ellis".

Retrieved from "https://allthetropes.org/w/index.php?title=A_Certain_Magical_Index/Characters/Necessarius&oldid=1759623"
Categories:
Cookies help us deliver our services. By using our services, you agree to our use of cookies.