Everything About Fiction You Never Wanted to Know.
(Redirected from The Tenth Kingdom)
Jump to navigation Jump to search 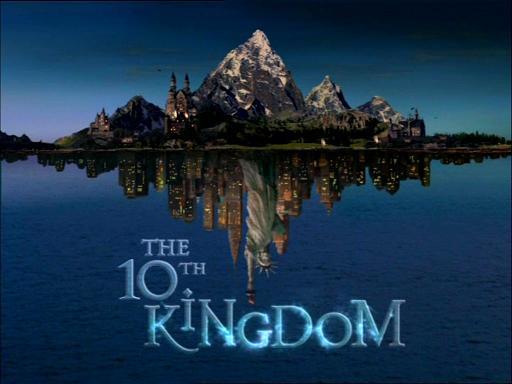 Once Upon a Time is Now.

Take just about every well-known Fairy Tale, myth, legend, oral history, and fantasy story known to man. Cross them with screwball comedy, an epic Hero's Journey, fantastic (for television, anyway) special effects, and a lot of surprising twists. Add a dash of tragedy and mystery, a sprinkling of some rather serious (or should we say, Grimm?) issues, and some great British casting, and what do you get?

Not the Wicked Stepmother's potion, but the 2000 NBC miniseries The 10th Kingdom. At almost eight hours long (ten with commercials in the original airing), this film is not for the faint of heart, and will probably require a lot of breaks (for the bathroom, if nothing else).

Virginia Lewis, a down-on-her-luck New York waitress, and her ne'er-do-well janitor father Tony, are accidentally dragged out of their boring, miserable lives when they cross paths with a golden retriever (actually an enchanted prince) and an ex-convict werewolf (actually, half-wolf) -- one fleeing his stepmother the Evil Queen, the other working for her (sometimes). Complications and hi-jinks result, as magic spills over into New York (the Tenth Kingdom of the title), and soon the foursome end up via magic mirror in the world of the Nine Kingdoms, where fairy tales are real but "Happy Ever After didn't last as long as we'd hoped." Pursued by vengeful Trolls and their odious father, and Rutger Hauer as a typically villainous but effectively chilling Huntsman, they must chase after the magic mirror and wend their way in and out of the lives of many fairy tale characters (always with a twist) in order to find their way home again.

Oh, and restore the prince to his throne, save the Kingdoms, learn a few valuable lessons, and discover some secrets that will resolve past tragedies. Something for everyone!

Not to be confused with The Twelve Kingdoms.

Tropes used in The 10th Kingdom include:

Wolf: Don't worry, I'm not who I used to be. I've had extensive therapy. I realize I have been using food as a substitute for love and I have the books to prove it - "Breaking the Cycle", "Heal Yourself in 7 Days", "Stop Blaming Yourself, Please, and "Help for the Bedwetting Child".

Tony: What is it with you people? What kind of twisted upbringing did you have? Why can't you just say, "Oh, that'll be a hundred gold coins"? Why is it always "Not unless you lay a magic egg, or count the hairs on that giant's ass"?

Evil Queen: If asked, you will say that your master, the prince, has returned and is well. If I hear one whisper, one rumor that anything is amiss, I will kill your children in front of you... Tonight, every king, queen, emperor, and dignitary throughout the Nine Kingdoms will be attending Prince Wendell's coronation ball. The evening will proceed as planned, with one tiny exception--we are going to murder all the guests.

Acorn: Maybe what you seek is down there.
Virginia: What do you mean by that?
Acorn: I don't know. I just always wanted to say it.

Virginia: No! We can't kill him.
Wolf: Of course we can, he'd kill us!
Virginia: That's not the point, he's helpless!
Wolf: Exactly why we should kill him now!
Virginia: Wolf, no!
Wolf: Awwww, he's gonna come after us!
Virginia: I don't care, we're not killing him.
Wolf: You're gonna regret this moment.

Tony: No, no! Once was enough.

Fairy #1: Oh look, they're all chained up! That can't be helping!
Fairy #2: Would you like to be separated from each other?
Tony: More than you can imagine.
(the fairies cast a spell, making their manacles fall off; Tony and Virginia each look around, only to find they're alone in different parts of the swamp)
Tony: Hey! When I said we wanted to be separated, I didn't mean literally!

Lord Rupert: Now to the real crisis. There is a shortage of bluebells throughout the Kingdom, my color scheme for the coronation banquet will have to be completely rethought.

The magic mirror being consulted can only hear rhyming verse.
Virginia: Our mirror's smashed - what can we do? Where the hell are the other two?

Wolf: The days of Happy Ever After are gone. These are dark times.