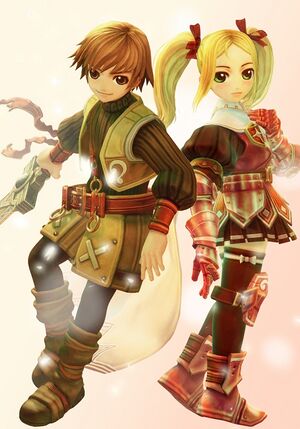 Radiata Stories is a role-playing game developed by tri-Ace and published by Square Enix for the PlayStation 2. The game is notable for its large number of distinct NPCs, each of whom have their own lives, lifestyles, jobs, personalities, homes, dialogues, and schedules. It makes for a much more realistic experience than the standard RPG towns populated with eerily identical cookie cutter residents who say the same things ad inifinitum, though the game is limited by the hardware into making the characters repeat the same list of activities every day, with a few exceptions.

Furthering the theme of realism, the main character, Jack, can interact with most objects in the game, mostly by kicking them - doing so to furniture and other inanimate objects, for example, will occasionally turn up items or money, while NPCs will fight Jack in a duel. This being Jack's primary method of interacting with everything and everyone he encounters would normally seem out of place, but it fits quite well with his personality.

While there are easily over 150 distinct recruitable characters in the game, there are only three that are central to the plot: Jack Russell, a rude, cheerful teenager who plans on being a knight; Ridley Silverlake, a smart, proper, well-off young lady who wants nothing to do with him (at least at first); and Ganz Rothschild, a polite, genteel man, who is their superior in the Rose Cachon brigade. This doesn't last long, however.

After one successful mission, what should be a simple Fetch Quest goes awry and Ridley suffers a debilitating injury to the point where she's bedridden. As a consequence for their failure to protect her, both Jack and Ganz are expelled from the knighthood because of her Overprotective Dad. From there, they both try to join Theater Vancoor, the warrior guild, but Ganz fails the test and ends up in the Void Community (the thief guild) instead. The game then allows the player to start exploring the environment a bit, and segues into the open-ended play promised on the box instead of a tedious paint by numbers RPG.

As Jack and Ganz try to adjust to their new lives, a series of seemingly unrelated incidents begins to occur. Ridley begins experiencing strange headaches and speaking in a voice that is not her own. The dreaded disease Algandars, said to be the only thing capable of fully killing the immortal elves, makes a reappearance after being gone for centuries. Tensions between the humans and non-humans skyrocket as three particular individuals become prominent in the politics of Radiata: Zane, human-hating leader of the light elves; Lord Lucian, a mysterious courtesan of Radiata Castle who displays frightening Chessmaster capabilities; and Cross Ward, Ridley's Jerkass fiancee.

Another aspect of the title is that it takes place in real time (albeit with the typical video game compression). While many games incorporate some method of this, Radiata Stories is one of the few where keeping track of the hour is crucial to gameplay, due to the fact that the majority of "free time" between missions provides only brief snatches where Jack is able to interact with other characters and the like before setting out once more. As a result, this is one of the few games where Level Grinding is difficult, if not impossible, to accomplish.

There is a character page now. Character-based tropes should be directed there.

As a last tidbit of info, Radiata Stories is also notable for its high content of humor despite having a pretty serious story.

Not to be confused with Radiant Historia, a similarly-named game that inherited a large portion of Radiata's production team.

Tropes used in Radiata Stories include:

(Leonard explains how he and Jack are sharing the stinky, dirty Trainee's Room)
Jack (camera spinning around him): NOOOOOOOOOOOOOOOOOOOOO!
Leonard (Beat): When you're done with the death wails, come on in.
Jack (quietly): Fine...

Jack: I never had a chance at winning.
Gerald: Of course not, fool. I was a swordsman years before you were born.