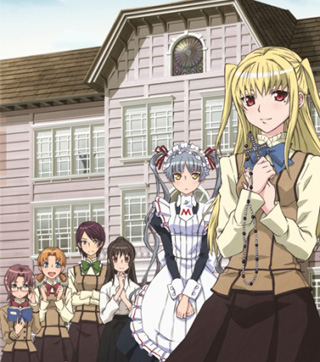 Kanako's in the upper-left window.

Kanako Miyamae Does Not Like Men, to the point of breaking out in hives when she comes in contact with them. Hoping to find her true (female) love interest, she attends Ame no Kisaki Girls' School where her parents met. Except she missed the school and wandered onto a private estate. As if fate had led her there, she sees a perfect girl before her and falls in love at first sight.

Fate really enjoys toying with people. Mariya Shidou, her perfect girl, is actually a boy in disguise, the grandson of the school's ex-chairwoman, and is one hell of a dick. In order to keep herself from being kicked out of the school, Kanako is forced to cooperate with Mariya against her will.

Based on the manga by Minari Endou and adapted into an anime for the early 2009 season by Studio Shaft, which means another layer of randomness is added to what's already there. Sentai Filmworks has licensed the anime for release in February 2010, while Tokyo Pop is currently releasing the manga. A second season of the anime has begun airing as part of the Spring 2011 anime season.

Tropes used in Maria Holic include:
Retrieved from "https://allthetropes.org/w/index.php?title=Maria_Holic&oldid=1716392"
Categories:
Cookies help us deliver our services. By using our services, you agree to our use of cookies.