Everything About Fiction You Never Wanted to Know.
< Basilisk: The Kouga Ninja Scrolls
Jump to navigation Jump to search

In Basilisk, each member of the Iga or Koga clans is represented by its ten best warriors (plus Princess Oboro). These ninja specializes in one superpowered technique, but if we talk generally, their abilities are all grouped in two specialities: the Koga ninjas have more stealthy and spy-related skills, the Iga use theirs to attack and finish their foes directly.

The twenty "chosen ones" are:

The old leader of the Kouga clan, and grandfather of Gennosuke. He used to be in love with lady Ogen. Seems to be skilled at using poisoned needles. Gets impaled in the chest by Ogen.

Danjo's heir and strongest member of the Kouga ninja. He's a peace-loving idealist who's genuinally in love with Oboro and wants to put an end to years of hate and rivalry. His special power is a "Do Jutsu" (Fierce Ability) in his eyes, that allows him to send an attacker's killing intent back at him. Commits suicide after witnessing Oboro's suicide.

A hunchback spider-looking man, he's the first Kouga Ninja shown alongside Danjo. Can spit a web-like phlegm that's stronger than glue. He's ambushed by the Iga ninja and finished off by Hotarubi.

A fat, jolly ninja who's often seen near Gennosuke. Despite looking like a moron, he's very competent and quite smarter than he looks. His body is like a rubber balloon, making him able to squeeze through small openings. Is killed by Jingoro, who force himself down his gullet while in snail form.

One of the more mysterious and grotesque members, he's said to be an astromancer ad a seer. He has no arm nor legs, but can fight with an extremely long tongue and a knife hidden in his troath. His scale armor allows him to crawl around really fast like a snake. He's bifurcated by Tenzen.

Member of the Kouga Ninja he's a short and sneaky guy whose eyes are always shut. He's Okoi's older brother. His powers allow him to transform into anyone, simulate voices and even change his size. He's eventually tricked by Tenzen and killed by the soldiers escorting the Iga ninja.

A good friend of Saemon and Danjo's advisor. He's Gennosuke's maternal uncle and he taught him everything he knows, including the Dojutsu. He appears to be blind and has an excellent hearing but he can actually use the dojutsu, but only by night. Gets killed by Koshiro, since being blind he's able to work around the Doujutsu's only weakness.

A large and massive ninja of Kouga. Always seen around Hyoma and Saemon. He's very strong and can merge with the groud and any solid surface, allowing him to move around unseen. As a child he was traumatized by his father's death and shaved his head because of that. He's impaled by Tenzen while trying to flee from him and his corpse is merged inside a wooden panel, exhibited as a warning to the Kougas.

One of the two Kunoichi of Kouga, she's Saemon's little sister. She's a large, well muscled girl that despite her body acts more like a tomboy, but she's ready to take advatage of her large breasts if needed. She's a human-leech who can drain people's blood from her skin, causing also physical pain. She gets captured and tortured by the Iga clan and eventually is killed by Nenki while trying to escape.

The other kunoichi of the Kouga clan. She's a feminine woman with black hair, madly in love with Gennosuke and jealous of Oboro. When she's aroused, her breath becomes a poisonous miasma. She's horrorifically raped and tortured with needles by Tenzen, which drives her into insanity. 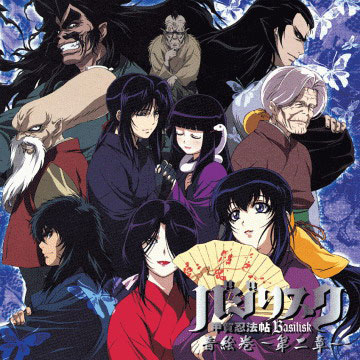 The old leader of the Iga clan, she used to be in love with Danjou. Her powers are unknown but she seems to have a tamed falcon as a pet. She's the very first person to die in the manga, killed by Danjou's needles. Though not before she takes him with her.

Ogen's granddaughter and Gennosuke's soon-to-be wife. She's a very sweet and clumsy person. She can't fight, but her eyes have the power of cancelling any ninja power or technique seen, which is considered as one of the most deadly powers in the whole series. After going throught a long series of Break the Cutie moments she kills herself in order to allow Gennosuke to win.

The first Iga ninja shown along with Ogen. He's a pretty boy who can use the hair of deceased women as deadly strings. He's Hotarubi's boyfriend. He's killed by Gyobu.

A very high-ranked Iga ninja serving Ogen, he's one of the strongest members, and surely one of the most evil characters in the manga, and that's saying something. He's the mastemind behing the Iga-Kouga war. Has an unhealthy attraction for Oboro. Thanks to a parasitic twin living in his body he can come Back From the Dead at will. Is eventually beheaded by Gennosuke and destroyed when Oboro use her Anti-Magic on the parasite twin while at work, thus nullifying his powers.

An old shinobi who can stretch his limbs and neck like boneless tentacles. He's grumpy and easy to anger. Meets his doom in Okoi's arms.

An odd-looking shinobi with very long and messy hair, huge eyebrows and long nose hairs. He can animate and control all the hairs of his body and can use a long staff. Hyoma use his dojutsu on him, causing him to breaking all his own bones.

A skilled warrior and shinobi, he's very protective towards Oboro and possibly in love with her. He obeys Tenzen's orders, but he's not as evil as him. Can fight with two kama sickles and use his breath to form a deadly Razor Wind attack. Halfway through the manga he's blinded by Gennosuke, who sent back his wind at him, but learns how to fight while blind. He's eventually poisoned to death by Kagero, who he thought was Akeginu thanks to Saemon mimicking her voice to distract him.

A slug man from Iga who can melt his body with salt in order to lay ambushes and move faster. However too much salt reduce him to a pitiful squealing worm. Water can return him to normal. He's deeply afraid of the ocean for obvious reasons. He's killed by Gyobu who tosses him in the sea, causing him to melt before Akeginu can help him.

Iga kunoichi, she's a beautiful woman who serves as Oboro's maid and actually cares for her plea. She can expel blood from her skin and use it in battle along with daggers and shortswords. She's in love with Koshiro. She's eventually tricked and captured by Saemon, and stabbed in the heart by Kagero.

Kunoichi from the Iga clan and Yashamaru's lover. She can summon and control insects and snakes to do her bidding. She's only sweet and gentle with Yashamaru, and tends to be violent and rude to anyone else. She's maimed and killed in battle by Saemon.

Retrieved from "https://allthetropes.org/w/index.php?title=Basilisk:_The_Kouga_Ninja_Scrolls/Characters&oldid=1902597"
Categories:
Hidden category:
Cookies help us deliver our services. By using our services, you agree to our use of cookies.