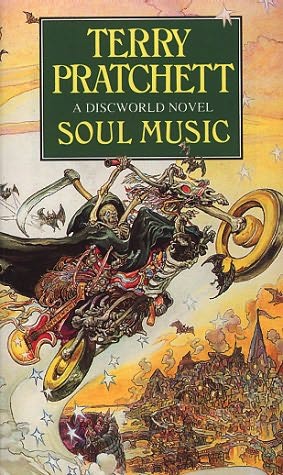 The 16th Discworld novel, and third in the Death theme: much more a sequel to the first Death book, Mort, than the second, Reaper Man.

There are two interconnected plots: in the first, the deaths of Mort and Ysabell in a car(t) crash cause another case of Death Takes a Holiday after a Heroic BSOD, leading to his "granddaughter" (Mort and Ysabell's daughter) Susan taking over The Duty, and incidentally becoming one of Disc fandom's favourite characters. She only met her grandfather once or twice as a young child, and afterwards was raised by her parents to take a very cold and rational view of things, which is not much of a survival trait on the Disc.

In the second, young Llamedosian musician Imp y Celyn comes to Ankh-Morpork to make his fortune and winds up becoming a musical sensation when he inadvertently invents the Discworld's equivalent of Rock Roll.

Unfortunately for the young "Musics With Rocks In" Star, supernatural forces have conspired that he should live fast...and die young. Can Susan fight fate and save his life?

Was made (along with Wyrd Sisters) into an Animated Adaptation. The L-space entry is here, and explains the numerous sly references to famous bands and songs. A fan-created expanded version is here and picks up the slack since the official annotated Pratchett file has not been updated for six years.

This novel's title is a pun, or play on words, on (of course) the music genre.

Tropes used in Soul Music include:
Retrieved from "https://allthetropes.org/w/index.php?title=Discworld/Soul_Music&oldid=1708378"
Categories: