Everything About Fiction You Never Wanted to Know.
(Redirected from You Fail Mathematics Forever)
Jump to navigation Jump to search 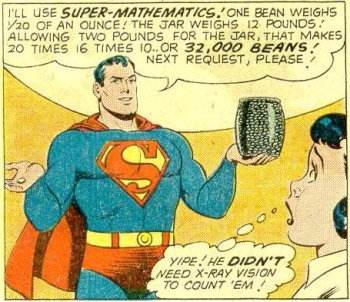 You're watching a show or movie, or reading a book, when suddenly something numerical throws you for a slight curve—like a date, or a character's age. Your brow furrows. You start ticking things off on your fingers. What the hell? That wasn't right!

You have just discovered the fundamental truth: that your favorite author went to study literature because they failed irredeemably at high school math and went for something where they would never see a number ever again. This is a particular kind of continuity error that would be avoided if professional writers kept calculators at their desks. In their defense, some of these mistakes can be obscure and noticed only by die-hard fans. It can also come from multiple writers not checking with each other, or screwups in the timeline.

Compare Soap Opera Rapid Aging Syndrome, Not Allowed to Grow Up, and Longest Pregnancy Ever, where the writers can do math; they're just intentionally fudging it. See also Sci-Fi Writers Have No Sense of Scale and Artists Are Not Architects. Possibly the root cause of Everybody Hates Mathematics. Might even involve E=MC Hammer. You Fail Statistics Forever is a subtrope.

Examples of Writers Cannot Do Math include:

Pupil: Ten, of course. Master: Nope. Eleven. Unless you string your fence in a circle. If you put the posts in a closed figure, you only need nine because you start and end on the same post. Pupil: And how am I to know such things?

This was corrected in later editions.

Keys is one and two-fifth, so how we flip Thirty-two grams raw, chop it in half, get sixteen, double it times three We got forty-eight, which mean a whole lot of cream Divide the profit by four, subtract it by eight We back to sixteen, now add the other two that 'Mega bringin' through So let's see, if we flip this other key Then that's more for me, mad coke and mad leak Plus a five hundred, cut in half is two-fifty Now triple that times three, we got three-quarters of another ki