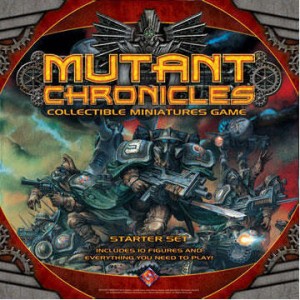 Mutant Chronicles is a post-apocalyptic role playing game created by the Swedish company Target Games. It also spawned a semi-successful franchise: two Collectible Card Games (Doom Trooper and Darkeden), three Board Games (Fury of the Clansmen, Blood Berets and Doom Troopers: Siege of the Citadel) two tabletop wargames (War Zone and Mutant Chronicles: Collectible Miniatures Game), a Video Game (Doom Troopers, the second one planned to be a RTS in the vein of Dawn of War was canned), a short Comic Book series and a film whose writers apparently Did Not Do the Research or Just Didn't Care, not to say it wasn't still good on its own.

What's it all about? Earth gets too tight for the MegaCorps, so after battling for quite a time, they go and colonize the whole inner Solar System (and a few outposts beyond), since All Planets Are Earthlike (MASSIVE terraforming). Sadly, Imperial colonizers go a planet too far, reaching the mysterious Tenth Planet (named Nero) and unleashing the Cosmic Horror - The Dark Soul along with its Apostles and their Dark Legion. People go nuts and form evil cults, the Dark Symmetry makes all sufficiently powerful computers go evil, Demonic Alien Invaders expand their ranks with Squicky Body Horror Shop creations from cybernetic zombies and Mutants of different kinds to Godzilla-sized zombies to biomechanical Spider Tanks. In short: The End of the World as We Know It.

Of course, the MegaCorps try to stop them, get their asses handed to them a couple of times, and if not for a Church Militant called the Brotherhood, they'd fail forever. With the Brotherhood's help, the bigger part of humanity repents (mainly because the Brotherhood's methods are brutal, but work for humanity's good), leveling the playing field. On the other hand, corporate rivalries aren't forgotten; if the Corporations aren't kicking Legion ass, they're most probably butting heads over resources. If the Cartel, a body formed especially to mediate among the MegaCorps, allows it. Most of the time, it does.

Most of the franchise is set about a thousand years after the defeat of the Dark Legion's first onslaught; humanity has rebuilt, but much of its past achievements have been impossible to equal (computers are usually based on vacuum-tube technology, most firearms still use jacketed lead bullets, and anything terraformation-related is still Lost Technology save for maintenance). And while the Megacorporations are once again at each others' throats, corruption and moral decay are spreading everywhere, even the vaunted Brotherhood, just as the Dark Legions and Dark Symmetry, which by then were barely more than a myth to most people, are making a comeback after marshalling their forces for another go at destroying humanity...

Trope In The Name Of The Cardinal!
Retrieved from "https://allthetropes.org/w/index.php?title=Mutant_Chronicles&oldid=1758510"
Categories: