Everything About Fiction You Never Wanted to Know.
(Redirected from Abominable Snowman)
Jump to navigation Jump to search 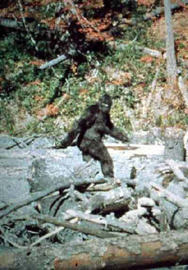 The other UFO: Unidentifiable Furry Organisms.

Tall hairy humanoids who maintain a furtive existence in various remote corners of the world. "Bigfoot" and "Sasquatch" are different names for essentially the same entity, whose stomping grounds (ahem) are mostly in the northwestern corner of the United States and the southwestern corner of Canada. The "Yeti" or "Abominable Snowman" is a variety found high in the Himalayan Mountains, commonly depicted (whether due to associations with familiar Arctic animals like the polar bear, or just the "snowman" association) with white fur in fiction, although the local legends described it with red to brown hair. Other lesser known varieties turn up in world-wide folklore and history under an assortment of names, such as the "Skunk Ape" of the swamps of the southeastern United States.

Common characteristics are said to include an extreme shyness towards humans, emitting horrible odors and unearthly noises, and of course scattering large footprints about as they frolic in out-of-focus areas. Most scientific authorities regard these creatures as either entirely imaginary or the fabrications of human pranksters, but like lake monsters and the Chupacabra and unlike "out-and-out" fictional species such as the Wendigo or The Jersey Devil, this furry trifecta has devout believers in their existence. Often speculated to be akin to large, herbivorous hominids such as Gigantopithecus.

Examples of Bigfoot, Sasquatch, and Yeti include:

Retrieved from "https://allthetropes.org/w/index.php?title=Bigfoot,_Sasquatch,_and_Yeti&oldid=1843902"
Categories:
Cookies help us deliver our services. By using our services, you agree to our use of cookies.