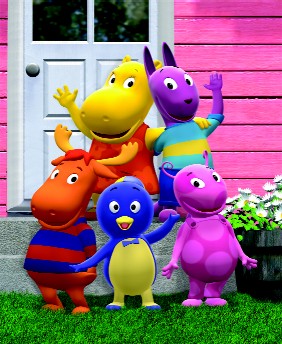 "We've got the whole wide world in our yard to explore..."
—Opening theme

A Canadian 3D CGI-animated series broadcast all over the world, mostly at Nick Jr. The series debuted in 2004 and completed in 2010.

The cast are all young Funny Animal friends: enthusiastic yet sometimes frenetic Pablo the penguin, Deadpan Snarker Tyrone the moose, Genki Girl Uniqua the... something, Shorttank Tasha the hippo, and initial Shrinking Violet, later Smart Guy Austin the kangaroo. All five live in what appears to be a suburban cul-de-sac with a large common backyard area.

We open on one or more of the characters in the backyard playing "pretend", setting up the scenario for the viewer in a song and dance which also reveals the episode's musical genre. Then things segue into a sort of holodeck-style fantasy -- whether in the kids' imaginations or literally isn't quite clear -- in which the backyard is transformed into the setting of the story and the characters dressed in appropriate costumes. From here the quest is treated entirely as if it were real...albeit clearly based off a child's logic...and frequently interrupted by musical asides.

Many episodes feature typical kiddie fantasy scenarios -- cowboys, superheroes, pirates, explorers -- but some are more sophisticated, and in later seasons especially several are full-on parodies of adult action-adventure: Bond, Star Trek, Indiana Jones etc. Further blurring the line between reality and imagination, the setting they create doesn't always stay within their control. Characters who weren't seen initiating the fantasy frequently show up within it, occasionally operating completely unbeknownst to the others, and the different plotlines collide in unexpected ways. The only absolute requirement is that a story contain no more than five characters, since no other speaking parts appear (excepting a couple one-offs in specials).

There seem to be no space or time limits while the fantasy is in progress, but in reality it never lasts longer than an afternoon, since it's always dispelled by somebody's tummy conveniently rumbling just after the adventure ends. They race home for snacks, giggling, the story setting disappearing behind them as they go. The only indication that anything out of the ordinary just happened is Tyrone's comment: "That was an excellent _________ adventure, don't you think?"

Notable for its heavy use of original music (overseen by Lounge Lizards founder Evan Lurie), in a different genre -- and usually not the one you're expecting -- in each episode. The photorealistic dance moves that have likewise become a series trademark are originated by live-action dancers performing as each character to that show's music; according to the creators, this process also gives the characters much of their individual personality.

For some, this general idea sounds familiar. However, the excellent music alone, an expertly affectionate tribute to the genres in question, makes this show a standalone winner. It has also managed to pick up a sizeable Periphery Demographic as one of the few current children's programs to work on child and adult levels simultaneously by actively using the characters' innocence to spoof genre cliches. Refusing to use Non-Interactivity or otherwise trying to hammer home a lesson, the show is probably the last pure celebration of intelligence and imagination available to preschoolers.

This is either impressive, as it refuses to follow 'standard' children show trends, or heartbreaking, as it is one of the only shows to do so.

Tropes used in The Backyardigans include:

Thanks to its genre-hopping nature, this show tends to run through a lot of standard tropes, often in a single episode:

Tyrone: Next we crossed a river then scaled the cliffs... of doom!

Tyrone: We just have to make sure that we don't make a mess.
(Cuts to the clean bowl. After a quick clock-spin, the bowl and then the entire room is shown as messy.)
Tyrone: I think we may have made a mess...

Pablo: There's something you should know, Lady in Pink.
Lady in Pink: Oh? And what's that?
Pablo: I'm not ticklish.

Austin: Why did the chicken cross the playground? To get to the other slide. Do you not think it's funny?

Tyrone: I am so mad! You made me miss my train! I have a circus to lead tonight in Big City, but I can't be there because of... CLOOOOOOOOOWNS!

Uniqua: Hey! That was fun! Let's do it again!
Tyrone: Or let's not!