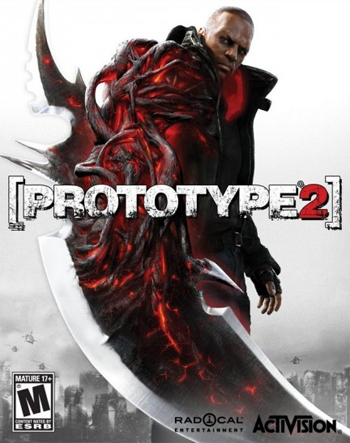 And you could have it all, my empire of dirt. I will let you down, I will make you hurt.

Prototype 2 is the sequel to the 2009 sandbox game Prototype, once again taking place in New York Zero, but this time with a new protagonist: former US Marine Sergeant James Heller, who returns from deployment overseas, only to find his wife and child dead, victims of a new outbreak of the Blacklight Virus that has left Manhattan in ruins once more.

In his rage and grief, James requests to be reassigned to the New York outbreak, and runs a series of high-risk missions in the hope of being reunited with his wife and daughter in death. Heller thinks he's finally gotten his wish during a mission into the virus-ravaged Red Zone, which leaves his entire unit dead and Heller fighting through hundreds of infected; but unfortunately for him, someone has other plans. Impressed by his resolve, the supposed creator of this new outbreak infects Heller with his own strain of the Blacklight Virus, granting the Sergeant similar near-indestructibility and inhuman powers. Now Heller seeks to use his new-found abilities to destroy the man who made him what he is, the man he holds personally responsible for all his misery: Alex Mercer.

While the game is notable for introducing the new player character of Heller and setting up previous series Anti-Hero Alex Mercer as the main antagonist, it also includes improved area designs and interactivity, increased NPC reactions and animations, a larger arsenal of weapons to take off fallen enemies, and an even bigger pool of abilities.

Starting in February 2012, Dark Horse Comics also began releasing a 3-part comic series that bridged the gap between Prototype and Prototype 2 entitled The Anchor, The Survivors, and The Labyrinth.

Tropes used in Prototype 2 include:
Retrieved from "https://allthetropes.org/w/index.php?title=Prototype_2&oldid=1855488"
Categories:
Cookies help us deliver our services. By using our services, you agree to our use of cookies.