Everything About Fiction You Never Wanted to Know.
(Redirected from Ghost Trick)
Jump to navigation Jump to search 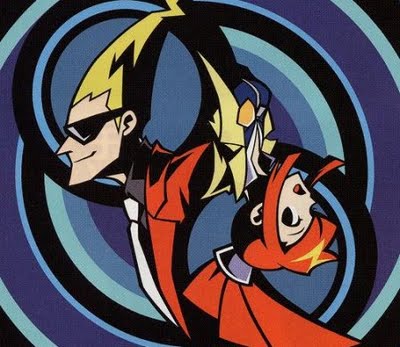 A woman and her crime-solving ghost.

An adventure game from the minds behind the Ace Attorney series for the Nintendo DS.

In an abandoned junkyard, a ghost wakes up to see a blue-faced assassin training a gun on a young woman. Between them is a red-clad corpse which he identifies as himself. Realizing he can still manipulate the environment even as a ghost, he stops the assassin and teams up with the woman to try and recover his memories and find out why he was killed. However, he only has until the next sunrise to solve this mystery, or else he will completely cease to exist.

The game is focused on solving a variety of puzzles in order to prevent events from happening and save the people around Sissel (the ghost), while working to uncover the truth behind his death. It was released on January 11th, 2011 in the U.S. and on January 14th, 2011 in Europe under the name Ghost Trick: Phantom Detective.

It is also now available for iOS on the iTunes Store; the free download includes the first two chapters, with the rest of the story locked behind purchases (either divided into three batches of chapters for $5 apiece, or the entire game for $10).

A word of warning: after a certain point, this game can be described as a pile of plot twists, so if you're reading this page but want to remain unspoiled, please step lightly.

Tropes used in Ghost Trick: Phantom Detective include:
Retrieved from "https://allthetropes.org/w/index.php?title=Ghost_Trick:_Phantom_Detective&oldid=1955162"
Categories:
Cookies help us deliver our services. By using our services, you agree to our use of cookies.