Everything About Fiction You Never Wanted to Know.
(Redirected from A Very Potter Sequel)
Jump to navigation Jump to search 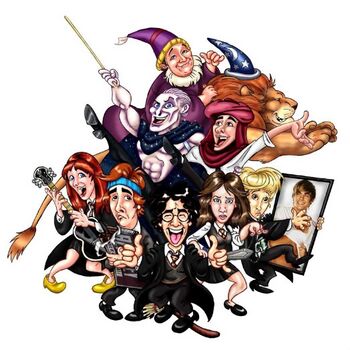 A Very Potter Musical and its appropriately named sequel, A Very Potter Sequel, are musical parodies of the Harry Potter books that were written and performed by Team Starkid (a group of former and current students of the University of Michigan) and released as a series of videos on their YouTube channel. The plots mash together a lot of elements from all the books in the series, but the musicals are very much their own work, with unique subplots and very unique takes on the characters, so unique that a character page can be found here. They run on Rule of Funny and Rule of Cool almost exclusively, and definitely aren't afraid to take Refuge in Audacity.

A Very Potter Musical (performed and later released in 2009) begins with Harry's second year at Hogwarts. Professor Quirrell, the new Defence Against the Dark Arts teacher, reinstates the House Cup Tournament, and a champion from each House is chosen to compete. But when Voldemort uses the tournament to fulfill a plot to return to his body, things take a turn for the grim for Harry and his friends, who must find and destroy Voldemort's Horcruxes before it's too late. The story takes most of its elements from books 1, 4, 6, and 7.

A Very Potter Sequel (performed and released in 2010[1]) begins immediately after the events of the first story, when Lucius Malfoy decides to use a time turner to go back to Harry's first year at Hogwarts and kill him before he can defeat Voldemort. As Harry, Ron, Hermione, Malfoy and the rest of the characters meet for the first time, Sirius Black escapes from Azkaban and the Ministry of Magic responds by sending Delores Umbridge to the school to watch out for Harry, and Remus Lupin also comes to Hogwarts to take up the job of Defense Against the Dark Arts teacher. Its story is mostly from books 1, 3, and 5.

If you are a fan of this work, it is highly recommended you also check out Little White Lie, Me and My Dick, and Starship which were also written and produced by Team Starkid. You can visit the Team StarKid store to get the soundtrack of A Very Potter Musical for free, as well as links to where you can buy some of their other music or totally awesome t-shirts.

Recently,[when?] Team Starkid announced their plans for a third Very Potter Musical. Their intention was to stage and premiere the threequel in the four-and-a-half months between Starship and the release of Harry Potter and the Deathly Hallows, part 2. However, the availability of Darren Criss (who plays Harry and writes the majority of Team Starkid's music) was in question since he was cast as a regular on Glee, and the project was indefinitely postponed... until it was announced at the StarKid Funtastic Slamaganza that it has been rescheduled for some point in 2012.

The musicals have a Character Sheet.

Tropes used in A Very Potter Musical include: