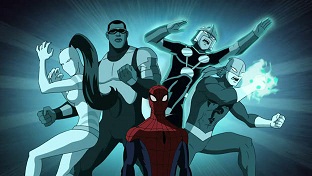 Spider-Man and his Amazi--...er Ultimate Friends [1]

Ultimate Spider-Man is an American animated series based on the superhero character published by Marvel Comics. Paul Dini (of DCAU fame), Brian Michael Bendis and Man of Action Studios (of Ben 10 and Generator Rex fame) are involved in the making of the show, which premiered April 1, 2012.

Peter Parker has been Spider-Man for one year when SHIELD sits up and takes notice. Nick Fury invites him to be professionally trained in superheroics, alongside other young heroes: Iron Fist, Power Man, Nova, and White Tiger. With SHIELD's experience and resources backing him, Peter might just become the Ultimate Spider-Man!

The show is action-comedy format, heavy on the characterization, with a healthy dose of Medium Awareness on Spidey's part.

Not related to the Ultimate Spider-Man comic book, outside of the usual incorporation of Ultimate Marvel elements.

Tropes used in Ultimate Spider-Man (animation) include:
Retrieved from "https://allthetropes.org/w/index.php?title=Ultimate_Spider-Man_(animation)&oldid=1693165"
Categories:
Cookies help us deliver our services. By using our services, you agree to our use of cookies.