Everything About Fiction You Never Wanted to Know.
(Redirected from Brainwash)
Jump to navigation Jump to search 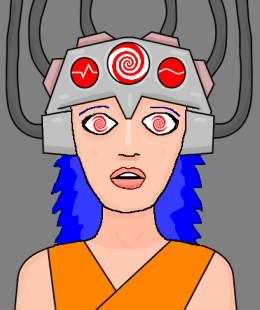 One, some or all of the main characters have been Brainwashed into happily slaving away for someone else and have to get their memories back to escape, usually assisted by someone who remembers who they were (The Power of Love often playing a part).

The most fun, delayed variety of brainwashing is the innocuous Manchurian Agent. If they are attacking people, it's a case of Brainwashed and Crazy. And look out for that one character in a million who's Not Brainwashed. Or in truly horrific settings, keep an eye on the ones Conditioned to Accept Horror. Compare with "Body Snatching". Occasionally done via television. May require deprograming to cure (see also Meat Puppet).

General consensus among heroes in fiction is that someone cannot be held responsible - legally or otherwise - for evil acts committed while brainwashed, the reasoning being that if someone is truly under a malevolent being's control, he isn't in control of his own actions, although the aftermath can be rather angsty at times, depending on how important it was to the overall plot. Indeed, if things like magical and psychic mind control were real, this would likely be subject to quite a lot of ethical and psychological debates, but fortunately, it is not real.

Naturally, there is Power Perversion Potential to be found (NSFW!) in this. See also Kiss Me, I'm Virtual. Often done to the Weak-Willed. If the heroes do it, it's likely Brainwashing for the Greater Good. Watch out for Intrinsic Vows.

Often the brainwashing victim will come to his/her senses and resist, necessitating the villain pour on the mind control mojo. Sometimes they will perform the hated task, but weep openly as they do so. This is not far off, as hypnosis cannot force someone to do something they instrinsically believe wrong. Occasionally even when the character does overcome it they don't clean off all symptoms, and all isn't instantly right with the world because of it. Can be the cause of a Face Monster Turn.

Examples of Brainwashed include:

Retrieved from "https://allthetropes.org/w/index.php?title=Brainwashed&oldid=1899514"
Categories:
Cookies help us deliver our services. By using our services, you agree to our use of cookies.