The Legend of Zelda: The Wind Waker/Characters

Everything About Fiction You Never Wanted to Know.
< The Legend of Zelda: The Wind Waker
Jump to navigation Jump to search

Characters in The Legend of Zelda: The Wind Waker. 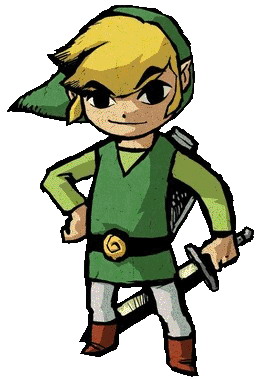 Link lived a peaceful, happy, giant enemy bird-free life on sunny Outset Island until his birthday, when his adorable little sister Aryll was kidnapped by a giant enemy bird. Link set out to do what any Knight Templar Big Brother would—find his little sister, rescue her, and stab whoever took her, preferably repeatedly. However, it turned out that the kidnapping of his sister was part of something much bigger; having Chronic Hero Syndrome, he decides to put a stop to it.

The King of Red Lions

Link's sidekick here is a talking red sailboat capable of carrying him all over the Great Sea and giving him advice. After Aryll is rescued, it is revealed that the King of Red Lions is posessed by King Daphnes Nohansen Hyrule, who had been searching the seas for a new hero ever since the Great Flood. 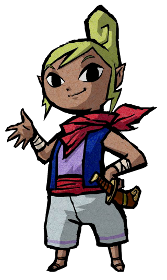 [1] Tetra in her royal garb as Princess Zelda

A young pirate girl sailing the seven seas, she meets Link fairly early in his quest and ends up taking him to the Forsaken Fortress. Even after she fires him from a cannon into the fortress wall and leaves, she and Link keep crossing paths for some reason. She's actually a descendant of the Hyrule Royal Family, although she doesn't know this.

A group of Pirates Who Don't Do Anything that later appear in Phantom Hourglass, led by Tetra. Despite being much older than her, they are extremely loyal to their captain and follow every single one of her commands. They reluctantly provide Link with a ride on their ship to the Forsaken Fortress in the beginning on the game and are actually joined by him in the game's end. They are hinted to be descended from the Hyrulean aristocracy; post-game, they became the first settlers of the new Kingdom of Hyrule in Spirit Tracks.

Apparently Tetra's first mate and also the member most dedicated to her. He shows an initial dislike of Link, though it wears off quicker than he'd willingly admit, claiming to have tricked a postman worried about him into giving him information about the whereabouts of a treasure when, really, he was just as worried about the little guy.

The most knowledgeable member of the crew.

The lowest-ranked of Tetra's pirates, Niko is overjoyed when Link joins the crew, because now he at least outranks somebody. He narrates the opening of Phantom Hourglass with his paper cut-outs, and is later seen doing the same in Spirit Tracks. He appears in that game as an old man, presumably the last survivor of the founding generation of new Hyrule.

Sages Of The Master Sword

The Sages of the Master Sword are the Earth Sage and the Wind Sage. Their prayers keep the Master Sword sharp and give it the power to repel evil. Because of this, Ganondorf summoned two monsters to kill the original sages, and Link has to awaken the new sages.

A young girl of the bird-like Rito race in The Wind Waker. Maid to Prince Komali and the only female member of her race who's seen on-screen. She is later revealed to be the reincarnation of the Sage of the Earth, who blessed the Master Sword with its evil-destroying properties.

A member of the plant-like Korok Race from The Wind Waker, who are an evolved form of the Kokiri. He's later revealed to be the Sage of the Wind, the other Sage who blessed the Master Sword.

Link's beloved little sister. She has a similar personality to Malon from Ocarina of Time and is always surrounded by seagulls, which is probably a nod to Marin from Link's Awakening. She is kidnapped along with several other Hylian girls at the beginning of The Wind Waker, setting Link off on his quest.

A spoiled rich girl who lives on Windfall Island, she is captured and imprisoned along with Aryll. Tetra's crew eventually bring her home, but not before demanding her father's entire fortune as a reward. Afterwards she can be seen in rags working for Zunari, and a sidequest involves Link stalking her to reveal her as the burglar stealing from Zunari.

Another one of the girls kidnapped along with Aryll. You can find her father begging for someone to go find her when you first visit Windfall Island. Unlike Mila, she starts off pretty poor.

A large fiery insectoid monster that dwelled within the cavern underneath Valoo on Dragon Roost Island.

A large, apparently mechanical statue guarding the top floor of the Tower of the Gods as a final test of the Goddesses for anyone attempting to enter Hyrule to claim the Master Sword.

A giant Kargoroc that wears a mask under Ganon's control that stalks the Great Sea searching for "girls with long ears" in an attempt to find Zelda.

Jalhalla, Protector of the Seal

A gigantic Poe wearing a vest that is actually formed from 15 normal poes fusing together.

Molgera, Protector of the Seal

A large worm like monster that hides beneath the sand and sends smaller larval versions of itself to hunt Link from beneath the ground. 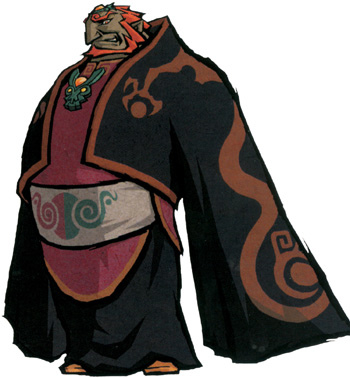 Several years after being imprisoned in the Dark Realm, Ganondorf is finally able to get free, and the Hero of Time, having been sent back to the past by Zelda, is nowhere to stop him this time around. Free to do as he pleases, he plunges Hyrule into chaos once again. The citizens of Hyrule pray for the Goddesses to intervene, and so they do, by flooding the kingdom and sending selected people to the mountaintops to survive the flood and repopulate the world. Hyrule was left frozen in time undersea, but Ganondorf still managed to escape to the surface, many centuries later, in a fortress he then seized as his own. His first course of action then is to kidnap every single girl with blond hair and pointy ears he can, in an attempt to find the current descendent of the Royal Family.

Retrieved from "https://allthetropes.org/w/index.php?title=The_Legend_of_Zelda:_The_Wind_Waker/Characters&oldid=1842775"
Categories:
Hidden category:
Cookies help us deliver our services. By using our services, you agree to our use of cookies.