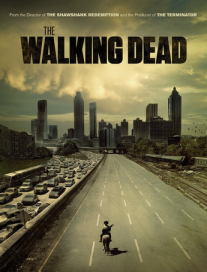 And where do you think you're going?

The Walking Dead is a Live Action Adaptation television series based on the comic of the same name. Like the comic, its story focuses on a group of survivors struggling to stay alive in a world overrun by undead humans. Rick Grimes, the leader of the group, awakens in the hospital from a coma to find everything has gone downhill. He sets out to find his family, and the rest of the show focuses on him and the rest of the characters as they adapt and relate to each other in a terrible new world.

The series premiered on October 31, 2010 on AMC, and is produced by Frank Darabont, Glen Mazzara and Gale Anne Hurd. Comic creator Robert Kirkman is also heavily involved with the production, including being the writer of the fourth episode. The show has finished its ninth season.

After the Season Two premiere broke cable records among the 18-49 demographic, AMC announced on October 25, 2011 that the series had been renewed for a third season.

The series has its own homepage. It includes a series of webisodes and other extra content, including online content for the Talking Dead talk show accompanying the series. A flash-based adventure game entitled "Dead Reckoning" is also available on the website, and shows Shane's initial encounters with the walkers when the outbreak begins.

The show takes liberties with its source material, so comic readers, don't except to come into this knowing everything beforehand.

Tropes used in The Walking Dead (TV series) include:
Retrieved from "https://allthetropes.org/w/index.php?title=The_Walking_Dead_(TV_series)&oldid=1920102"
Categories:
Cookies help us deliver our services. By using our services, you agree to our use of cookies.