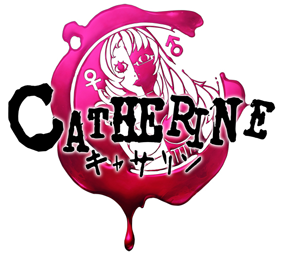 From the creators of Shin Megami Tensei and Persona comes an unusual and distinctive Puzzle Game. It's Atlus's first HD game, marking their entry onto the Play Station 3 and Xbox 360 consoles with animated cutscenes by Studio 4°C.

Vincent Brooks is just your average 32-year old unambitious salaryman in a stable but unremarkable long-term relationship with a woman named Katherine McBride. When Katherine brings up the prospect of marriage, Vincent freaks out... and then suddenly meets a gorgeous and carefree girl called Catherine who is just his type. He sleeps with her, but starts having strange nightmares where he is wandering in a world of endless staircases and being pursued by... something.

What's more, there's been a rash of mysterious deaths lately- men found in bed with a look of sheer horror frozen on their faces- and a rumor going around that if you fall in a nightmare and don't wake up before you hit the bottom...

Catherine also features a multiplayer mode called "Colosseum" where two players go head-to-head in a single action stage, each trying to make the other Ring Out. It's fun enough to have caught on with the Tournament Play crowd. No, seriously!

The game was released on February 17, 2011, in Japan, July 26, 2011 in North America, and February 10, 2012 in Europe. As of August 4, it had managed to break Atlus's previous launch records, cementing Catherine's place as their fastest selling title in the U.S. with an impressive 200,000 units sold in just one week. [dead link]

It also spawned its own Wild Mass Guessing page before it even got a works page.

Tropes used in Catherine include:
Retrieved from "https://allthetropes.org/w/index.php?title=Catherine&oldid=1773547"
Categories: