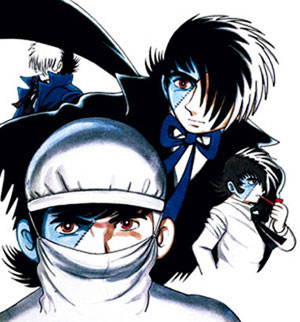 A manga series about an unlicensed physician who charges immense fees to use his miraculous healing skills.

Created by Osamu Tezuka, the original manga series ran from 1973 to 1983. Since Tezuka was himself a qualified medical doctor, the series often had a strong sense of verisimilitude, but the creator was not above exaggeration for Rule of Cool and Mundane Made Awesome moments, or even just making up new diseases and medical conditions. The series has had several animated adaptations.

Black Jack himself is a mysterious but distinctive figure, with a scarred, discolored face and a white shock in his black hair. He lives alone in an isolated beach house at the beginning of the series, before taking in Pinoko. Black Jack is a brilliant surgeon, but has no license (the reasons for this vary a bit between adaptations.) He charges enormous fees to wealthy clients, but often helps the needy for just as much as they can pay, or even for free, and if his operations fail generally refunds the money paid. His behavior is often abrupt to the point of rudeness, and he has a rather dark sense of humor. Often, he will arrange circumstances to teach An Aesop to the guest character of the story.

Other manga series have featured an Captain Ersatz or Lawyer-Friendly Cameo of Black Jack when the script calls for a doctor.

Not to be confused with comedian Jack Black. Or the card game. Or Say Hello to Black Jack, which is also a manga about doctors who must work within the Japanese medical system, unlike their childhood hero.

Tropes used in Black Jack include:
Retrieved from "https://allthetropes.org/w/index.php?title=Black_Jack&oldid=1726603"
Categories: