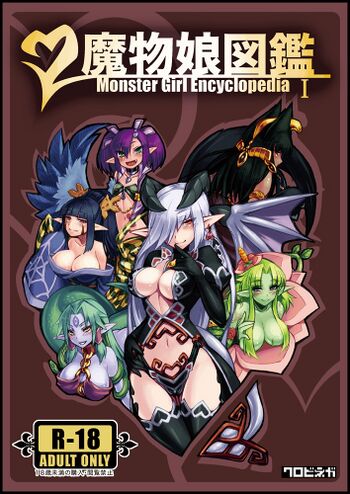 Now replace all of said monsters with Cute Monster Girls, and throw in huge amounts of Fan Service and outright sex. The Monster Girl Encyclopedia is a bestiary dedicated to cataloging all the different kinds of Cute Monster Girls in the world. The entries are filled with Fetish Fuel, and most are Not Safe for Work.

A compilation of translated entries for the Encyclopedia canon could at one time be found here (the original site needed registration in order to view the contents, which makes the Wayback Machine link mostly usely). New monster species are being added all the time by the original creator , and so the list linked above is not complete yet.[when?] Just go to either Danbooru (NOT SAFE FOR WORK) or Gelbooru for the newest additions to the list ( which may not even be translated into English yet). A new -booru has opened recently[when?] thanks to the Monster Girl Unlimited staff: MonsterGirlbooru WARNING: The -booru sites contain NSFW material! Do not browse with touchy relatives present.

Also see Living with Monster Girl for a Doujinshi series with similar content.