Everything About Fiction You Never Wanted to Know.
< Freezing
Jump to navigation Jump to search

Kazuya enrolled in the "Academy for Extradimensional Affairs and Genetics" to support the Pandoras in their cause, bound by the dying wish of his older sister Kazuha, a Pandora who passed away at the end of a fierce battle four years ago. After he learns the rumors about Satellizer's treatment of those who touch her, he cannot believe it and ignores the warnings of others to apologize to her for causing her first loss. 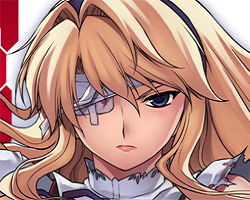 Satellizer is a Sophomore Pandora-in-training whom is known as the strongest in the Sophomore year at the school Kazuya has recently transferred to. She was undefeated in the academy's carnival battles until Kazuya surprised her with a tear filled hug. She is referred to by the other students as The Heartless Witch and The Untouchable Queen, due to her anti social behavior and her reaction to being touched. Rumour has it that Satellizer has killed over 20 Pandora and Limiters who dared touch her, and that she does not have a Limiter because of her cruel treatment of them. Because of this, she seen as a violent psychopath and her fellow students are absolutely terrified of her. Her volt weapon is a blade-like weapon.

A transfer student visiting from a small town in Tibet. Kazuya helps her fight some thugs when she came to town looking for her soulmate. Simple and guileless, Lana has a strong sense of justice.

Kazuya's sempai and the pretty student body president of the Genetics academy. She was giving Kazuya a tour around the academy when they witness the confrontation between Satellizer and Ganessa. Chiffon is the first to warn Kazuya about how dangerous Satellizer is and attempts to dissuade him from approaching her for the sake of his own safety. She often seen with Ticy, the vice president. Despite her timid, polite demeanor, her position as president puts her at the top of the school rankings, being the best student in the third-year class. It's later revealed that she's the also the strongest Pandora of her generation, the only "Type Maria", and she is forced to bring that power to bear when Amelia Evans goes berserk, turns into a Nova form, and nearly wipes out the E-Pandora facility. Chiffon succeeds in stopping Amelia from self-destructing and killing all of the people present, but at the cost of her own life.

The second-ranked strongest third-year student from the United Kingdom. Elizabeth is the leader of the third-years who maintain the Academy's hierarchy and punish those who break them. When she hears news of Miyabi's defeat at the hands of Satellizer early in the series, she orders Attia to take care of the matter, but was stopped by Chiffon who orders her to stop targeting Satellizer. She initially refuses to let go of the grudge, but ultimately abandons it after Satellizer helped them defeat the Nova Forms during their attack at West Genetics. Among other interests, her family also runs a cosmetics firm and a winery; a running gag has her offer items to other Pandoras at a corporate discount. She is also the past winner of the Pandora Queen beauty contest in the anime. Elizabeth, despite her seriousness, is one one of the most noble characters in the series as she cares about her fellow Pandoras and hates the injustices committed against them. However, her desire to do the right thing would nearly cost her life and her family's reputation after she tried to exposes the truth of the E-Pandora program. She survives both the electric torture she's put through and a brutal fight with Charles Bonaparte, but once the 11th Clash ends, she temporarily retires as a Pandora alongside her limiter, Andre.

Ticy is the third-ranked strongest third-year student. She hails from Finland and acts as Chiffon's assistant in the position of Student Council Vice-President. After Chiffon's death in the 11th Nova Clash, Ticy becomes ruthlessly focused on becoming the student council president in her memory.

The fourth-ranked strongest third-year student from Switzerland. She a proficient user of the Accel Turn technique, being able to move so quick that she can attack from behind while starting out in front, resulting in an afterimage. Her Accel Turn is unique, as she can use Double Accel without the lag between turns. Morrison is her Limiter.

Ranked 5th among the 3rd years. A comrade of Attia.

The sixth-ranked strongest third-year student, hailing from Italy. Early in the series, she begins to manipulate the other third-year Pandoras to take out Satellizer under Elizabeth's orders, and later tricks Lana into fighting Satellizer, but was later stopped by Chiffon and Ticy's intervention. Though she is no longer allowed to take out Satellizer following the incident, she still plots elaborate schemes to humiliate Satellizer, though this becomes less important after Chiffon's death, at which point she encourages Arnett to take the position of Student Council President.

The Invincible Defender of Order

The seventh-ranked strongest third-year student from Germany. Her strong determination to punish those who break the Academy's rules stems from an incident that happened during her second year at the Academy where Marin Maxwell, a friend of hers, sacrificed herself to defeat a Nova. Believing that the disorder of the lower ranks was the cause for Marin's death, she will use all of her power to ensure that order in the Academy will be kept. It was only after her battle with Satellizer did she realize the truth behind Marin's death, and later breaks down into tears. She is a proficient user of the Tempest Turn technique.

A beautiful and flirty junior who gives herself the nickname The Liberator of Virtue. Miyabi partnered with three Limiters. She confidently requests Kazuya to become her fourth Limiter, and reacts aggressively when he refuses.

One of the many rivals for Satellizer, this second year Pandora took advantage of her momentary distraction by Kazuya to defeat Satellizer in carnival. Very competitive and hot headed, the victory over Satellizer earns her Rank SS, which she wastes no time in bragging to Satellizer about. Her bolstered ego leads to a confrontation with Satellizer in which she is provoked far enough to enable Pandora mode. Her Limiter is Kazuya's classmate Arthur, whom she is apparently quite fond of. Her volt weapon appears to be a number of flail-like chains.

Kazuya's classmate and dorm neighbor. Arthur is a freshman Limiter partnered with Ganessa Roland, whom he describes as "A real lover, a babe, strong and sweet on me too". His devotion to Ganessa seems absolute, and he is the second person to warn Kazuya about Satellizer.

Kazuya's fellow Japanese classmate as well as the class president. She wastes no time upon meeting Kazuya to gossip about Satellizer and along with Arthur warns him against apologizing to her. She is shocked and amazed when she sees Kazuya grab Satellizer's arm in the cafeteria without any violent repercussions.

The physics teacher and training instructor at the Genetics academy. She is also one of the numbers, the four who helped bring an end to the 8th Nova class four years previously. She and Elize left the army to become instructors at the Genetics academy. She seems to have been quite close to Kazuya's older sister Kazuha when they fought the Nova together. Her volt weapon is a spear.

The academy's medical officer and one of the numbers. Like Yumi, Elize left the army to become instructors at the Genetics academy, and the two appear to be close friends. Her volt weapons are duel daggers.

The principal of the Genetics academy. She welcomes Kazuya warmly due to his relation to Kazuha.

Cassie Lockhart is one of the Pandoras received stigmas when she was eight years old from Kazuha Aoi. She has three of them and a compatibility rate 90%, whereas most others can boast maybe 20%. She fought Satellizer in the past and in the aftermath of that fight Cassie questions that she really wants to fight as Pandora.

Known as the Immortal (不死身, Fushisha?), a Pandora from Genetics America (Known as US) who is capable of regenerating any part of her body. She is sometimes addressed as "Zombie Girl" (ゾンビ女, Zonbi Shōjo?) and "Undead" (アンデッド, Andeddo?) by Charles. She is one of the top five strongest third year Pandoras at Genetics worldwide being ranked second.

A rival to Dr. Aoi who feels humans should take whatever means necessary in order to fight back against the Nova and their incursions into the human world.

Kazuha and Kazuya's grandfather and he is the scientist that developed the Pandora process.

Head of the Chevalier. A ruthless politician, Spencer will not allow anyone to interfere his goals.

The E Pandoras are a part of the E-Pandora Plan or E-Pandora Project (Eパンドラ計画) is the project to create Pandoras from those that are genetically ill-suited to become Pandoras, to fill the need for more Pandoras than can be produced through current selection processes prior to the 10th Nova Clash. "E" stands for "Evolution", so this is the "Evolution Pandora Project". It is revealed that none of these girls officially exist and so are completely disposable and nothing can be done.

An Evolution Pandora who is said to be "three times stronger" than other Pandoras. She can use Double Accel, but was easily defeated by Elizabeth. However, she has a very strong will and continues to fight even after she is beaten badly and given a concussion, a trait reminiscent of Satellizer. She was the first to try the Mark III medicine, which was a failure and almost killed her. It is revealed that she has a younger brother who is in a wheelchair.

An Evolution Pandora who became a Pandora to escape hunger, thus leading her to eat often.

The most powerful Pandora of the 8th Nova Clash, the creator of the High End Skills, and Kazuya's older sister. She is said to have sacrificed herself at the Nova Clash to save her friends. Kazuha was special as much of her body was composed of Stigmata tissue, which allowed 20 Stigmata to be inserted into her body, but she was consumed by them and was in the process of turning into a Nova Form before her death. Because of this, the higher-ups started limiting the number of Stigmata a Pandora can have. Six of her Stigmata (known as the "Hero's Stigmata" according to Louis) have been inherited by Satellizer, three by Cassie, two by Charles, two by Julia, and one by Roxanne.

Ingrid's late friend. A second-year Pandora, she died fighting off a Nova to allow first-year students under her command to retreat. Her death was the cause of Ingrid's obsession with rules and hierarchy. Albert was her limiter.

The first Pandora, referred to as "The Mother of all Pandoras" and the "Holy Corpse," as all Stigmata used by other Pandoras and Limiters are actually fragments of her crystallized body. Her body is stored deep within West Genetics' underground chamber, the Ravensborne Nuclecheode, and was the main target of the Nova during the 10th Nova Clash.

The number one-ranked third-year student at Genetics UK, who looks similar in appearance to Satellizer except for her silver hair.

Retrieved from "https://allthetropes.org/w/index.php?title=Freezing/Characters&oldid=1915736"
Categories:
Hidden category:
Cookies help us deliver our services. By using our services, you agree to our use of cookies.