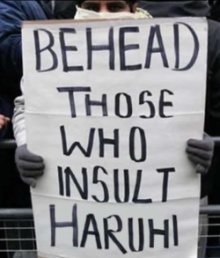 Isn't that too extreme for just an ordinary cartoo- HERESY!!! *BLAM*

Consider the following scenario. A given work of fiction becomes successful after its release. Very, very, very successful. So successful, in fact, that it manages to achieve what only a very small number of works throughout history have done: spawned its own religion.

The followers of this hypothetical religion, of course, are quite aware of their holy text's origin. History probably hasn't gotten that bad. Nevertheless, they have deemed it worthy of living one's life by. They may even have rivalries with other religions!

Notably, this has ceased to be a hypothetical. Such religions have developed and fall under the broad label Pop Culture Paganism. Ironically, it seems none centered around Haruhi Suzumiya have appeared.

Not to be confused with religion that treats its holy text as intellectual property.

Examples of Intellectual Property Religion include:
Retrieved from "https://allthetropes.org/w/index.php?title=Intellectual_Property_Religion&oldid=1942120"
Categories:
Cookies help us deliver our services. By using our services, you agree to our use of cookies.