This page is for characters in the Amestris military. 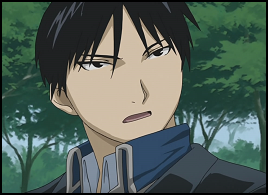 A colonel in the military stationed in East City. Known as the Flame Alchemist he seeks to become the Fuhrer so he can fix the country, and spread his ideals to the people.

Roy: Don't you dare die! Stay with me, Lieutenant!

"I almost passed out a few times." 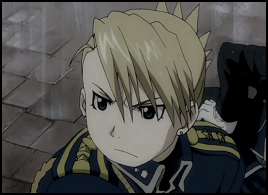 Breda: Anything for you, Riza, even if it means desertion.

"I thought you hated water. It makes your abilities useless."
"What do you make of this, Lieutenant?" "It seems to be a case of incorrect information, sir." 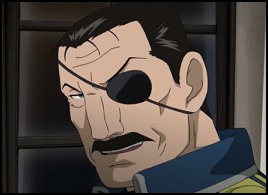 The ruler of Amestris. Fuhrer is his military title, and he is also the President of the Nation. King is just his name, though, it isn't a title. He came to rule Amestris after leading his nation out of a bloody civil war and setting up a military dictatorship. He is also the Homunculus Wrath. 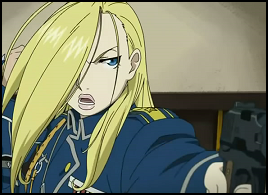 Major General Armstrong is Alex Armstrong's sister. She guards the northern frontier with Drachma in the Briggs base. 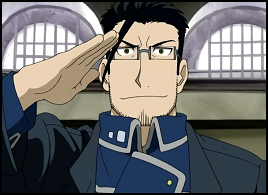 A rather quirky officer working in the records department and best friends with Roy Mustang. Assists both Mustang and the Elric brothers in their respective missions. Contrary to his appearance, he is not a man to trifle with.

Hughes: Oh! Is it over?
Armstrong: Lt. Col. Hughes where have you been this whole time?
Hughes: I thought it best to lay low.
Mustang: (annoyed) You didn't think of maybe backing us up a little!?
Hughes: Of course not! A person like me shouldn't get dragged into a freak-show with you pack of pseudo-humans! It's bad for my health!

Hughes: I heard there's a hot blonde girl in your room servicing you.
Ed: It's just my mechanic!

Hughes: Oh! Seduced your mechanic, did you? 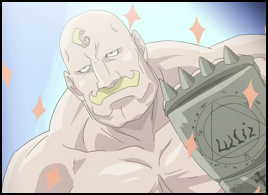 The Strongarm Alchemist, and a close ally of both Roy Mustang and the Elric brothers. He's a big lovable guy of many artistic talents, and is prone to, well, overacting on a regular basis.

" Destruction and creation are TWO SIDES OF THE SAME COIN!" 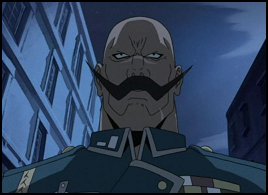 A Colonel Badass who served as Mustang's commander towards the end of the Ishval War. 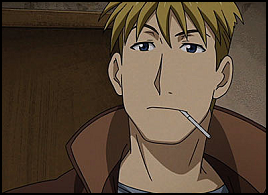 One of Mustang's closest subordinates; he's third-in-command of the unit after Mustang and Hawkeye. Before joining the army he was just your typical country boy.

A trio of officers that fill out various functions. Their loyalty to Mustang is unquestionable. 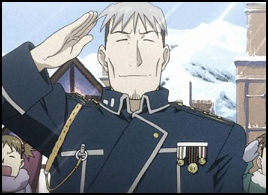 The oldest member of the group, and resident Butt Monkey at times. 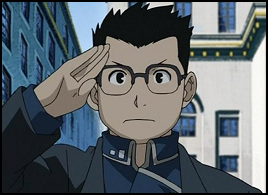 The youngest, and their communications expert. Has a friendly relationship with the Elrics. 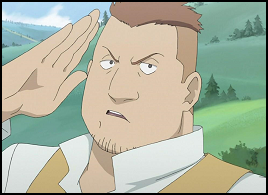 The big guy in Mustang's crew. Mustang drafts him for his tactical abilities. 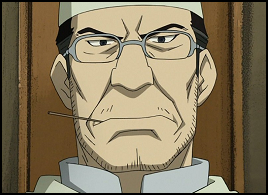 A coroner who served as a medic in Ishval. After the war he went through a major BSOD, drove off his family, and ended up working the morgue in Central Hospital.

"Ho, there could be an unknown pathogen in the doctor's house that could get out, and kill everyone in it." 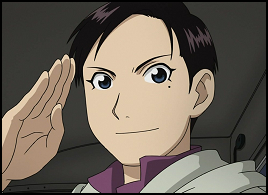 Armstrong's subordinate. Serves as one of Edward and Alphonse's bodyguards during their investigations in Central. Ed and Al's other bodyguard, his carefree nature combines unexpectedly well with his serious partner Maria. 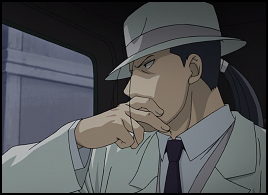 The Crimson Alchemist, a former State Alchemist who participated in the Ishval war. Kimblee is a sociopath and a sadist. His alchemical specialty is transmuting things into explosives. 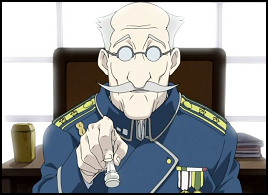 Head of the East Army and military mentor to Colonel Mustang, he is a major ally to Mustang. Sort of.

Affiliation: None
Rank: None
Specialty: None 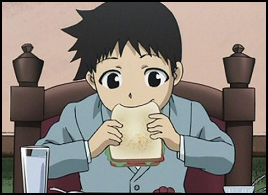 All right, this guy isn't actually in the military, but his status means he's pretty well-connected with them.

The adopted son of King Bradley, he studies hard in order to help his father rule the country. He's also a big fan of the Elric Brothers, especially Edward.

Border guard forces under Olivier M. Armstrong, stationed in Briggs fortress, in Briggs mountain range that divides Drachma and Amestris. They include Captain Buccaneer, a hulk of a man with a variety of deadly automail prostheses; Major Miles, a biracial half-Ishvalan who wants to change the perception of his people; and Lieutenant Henschel, General Armstrong's steadfast assistant. Lieutenant Vato Falman is later assigned to Briggs as well. General Armstrong's second-in-command. He is a quarter-Ishvalan from his grandfather's side, and is striving to change Amestris from the inside, so they will acknowledge the massacre they committed.

"Up here in the north, the law is the survival of the fittest. You get careless, and you get dead, understand? You tell me what to do again, and you'll never leave this hospital." 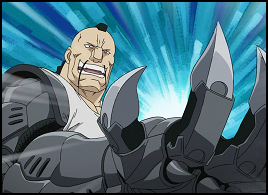 General Armstrong's third-in-command and field commander. A big guy with a pretty hot temper, he is regardless extremely devoted and will fight for his comrades.

Affiliation: None
Rank: None
Specialty: None 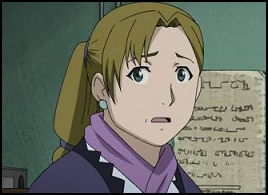 As with Selim, not exactly in the military, but in that category nonetheless. The wife of Fuhrer President King Bradley and adopted mother to Selim. Serves as a Morality Pet to Bradley and Selim, who is actually Pride. Her abduction by Mustang's crew serves to kick off the final arc of the story. 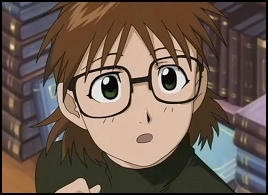 A mousy haired bookworm who is mostly used for comic relief. She's something of a coward and cries a lot. Most of the other characters refer to her as "bookworm." She gets a job at the military working under Hughes copying down the books that burned in the military library in a fire and proves instrumental in the Elrics' search for the Philosopher's Stone. 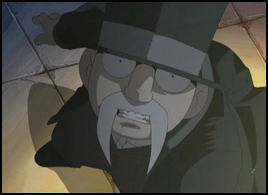 A retired State Alchemist known as the Silver Alchemist of Battle. He retired after having his leg chopped off in the Ishvalan Civil War. He is killed by Scar in his only appearance. 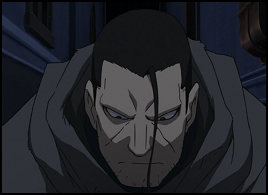 Better known as the Freezing Alchemist. A former State Alchemist who participated in the Ishval Massacre, McDougal went AWOL after the war and, years later, resurfaced as a madman trying to destroy Central City. It turned out he learned about the military's vast conspiracy. His plan was foiled by the Elric Brothers and he was murdered by Fuhrer Bradley.

McDougal: Do you know what shape this country is in?